Constable Martin "Marty" Cantu is currently serving his first term in office as Hidalgo County Constable for Precinct 2. Elected into office in 2012, Cantu has a long history of public service and experience in the field of law enforcement, and is proud to serve his community as an elected public official and peace officer for the County.

Cantu was born in McAllen, Texas, on May 13, 1971, and was raised in the Rio Grande Valley. Upon graduating from Pharr-San Juan-Alamo High School in 1989, Cantu enrolled at Pan American University; he attended for one semester and decided to serve our country in the military. In February 1990, Cantu shipped out to the Marine Corps Recruit Depot in San Diego, and three months later, on May 18, 1990, proudly earned the title of United States Marine. Cantu served approximately four years in the Marines in various capacities and was honorably discharged in February, 1994. 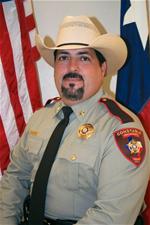 Upon discharge from the Marines, Cantu moved to San Marcos, Texas, where he was certified as a Corrections Officer and began employment with Wackenhut Corrections Corporations, a state-operated corrections facility in Lockhart, Texas. Cantu worked at Wackenhut for approximately two-and-a-half years, after which, he decided to continue his public service back in the Rio Grande Valley.

Cantu attended and graduated from the Hidalgo County Sheriff’s Office Police Academy as Class President and Salutatorian; he immediately began his career as a peace officer with the San Juan Police Department as a Reserve Peace Officer, where he remained for approximately six months. In 1996, Cantu was hired as a full-time peace officer with the Hidalgo Police Department and served as Patrol Sergeant until August, 1998, when he was hired at the Hidalgo County Sheriff’s Office.

While at the Sherif f's Office, Cantu served as a Patrol Deputy, Field Training Officer, Civil/Warrants Deputy and Criminal Investigator. Cantu also served on the SORT team, Hostage Negotiations Team and was a member of the Mounted Honor Guard. In October, 2002, Cantu left the Sheriff's Office to begin work as a private investigator for a Law Firm, while still serving as a Regular Peace Officer with the Hidalgo County Precinct 4 Constable’s Office, serving as a Reserve Deputy Constable until his election into office.

In 2005, Cantu obtained his Private Investigator License and opened his own business, International Investigating Agency, through the Texas Department of Public Safety - Private Security Bureau, which he presently owns and operates. In February, 2007, Cantu began employment with the Hidalgo County Safety Division as a Safety/Risk Management Specialist where he remained until his successful campaign for office as Hidalgo County Constable.

Cantu was elected to office in November, 2012, and was sworn into office by Hidalgo County Court-at-Law #2 Judge Jaime "Jay" Palacios in January, 2013, commencing his tenure as Precinct 2 Constable.